Back in 1948, it was observed that addition of magnesium in the molten pig iron could significantly alter the graphite structure in Cast Iron. In the initial microstructure of grey cast iron, graphite was in the form of flakes but assumed a spheroidal/nodular shape after the addition of Magnesium. The mechanical property of ductile iron as compared to grey cast iron show superior tensile strength, yield strength, ductility and impact resistance. The use of ductile iron has grown rapid rate over the past 50 years. The much improved properties were recognised to be of particular benefit to the centrifugal pipe industry and most of the pipe production is now in Ductile Iron. 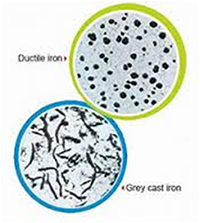